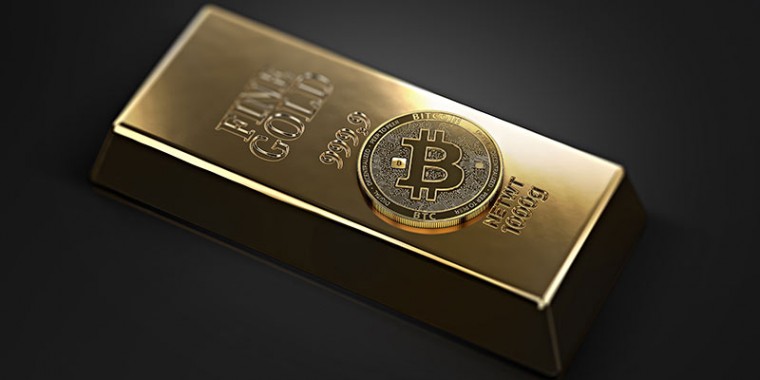 Having seen the astounding rise in Bitcoin’s value, those who remained on the sidelines are now kicking themselves for not buying it when it was first released. Surely, they’d be millionaires by now.

But is the meteoric rise of Bitcoin and other cryptocurrencies really an indication of true value?

It seems that more and more people justify investing in cryptocurrencies—even at current record prices—by claiming that they’re an effective hedge against the instability of fiat currencies.

But is it true?

Sure, a fiat money system where central banks can and do literally print money at will has its weaknesses. That’s why hard assets like gold are so popular among smart investors: as real stores of value, they provide a safety net against currency depreciation.

However, it’s doubtful that the same applies to cryptocurrencies. Despite what the crypto-evangelists will tell you, digital tokens will never and can never replace gold as your financial hedge.

Here are six reasons why.

#1: Cryptocurrencies Are More Similar to a Fiat Money System Than You Think.

The definition of “fiat money” is a currency that is legal tender but not backed by a physical commodity.

Since the United States abandoned the gold standard in the 1970s, this has been the case with all major currencies, including the US dollar.

Ever since then, US money supply has kept increasing, and so has the national debt. In contrast, the dollar’s purchasing power has been on the decline.

Take a look at this historical gold price chart. 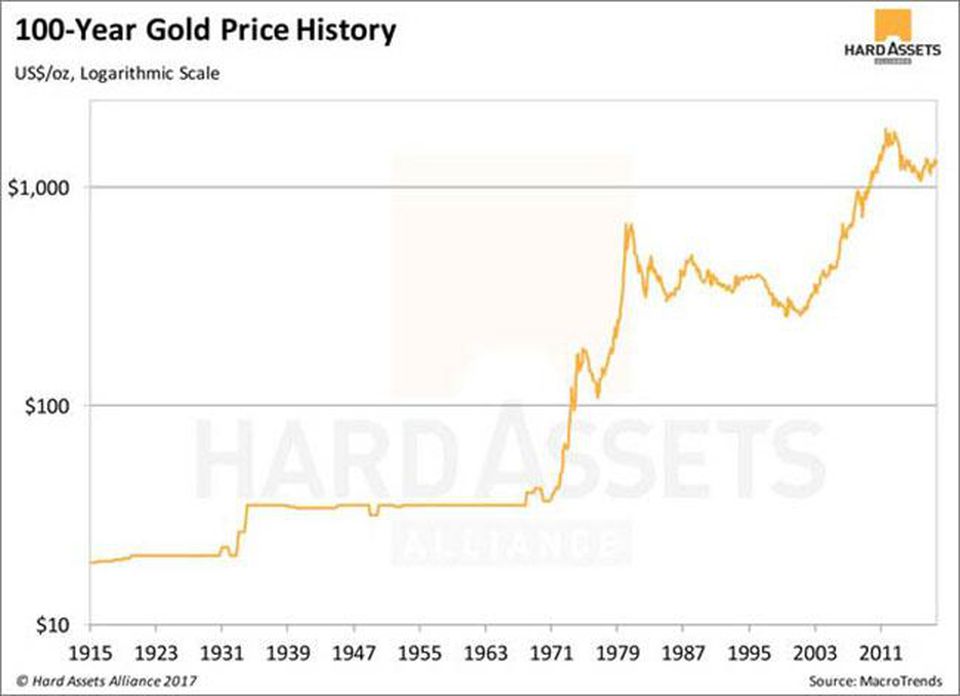 The huge spike in gold prices started right around the time when the Bretton Woods agreement collapsed in 1971 and US paper dollars couldn’t be converted to gold anymore. A clear sign of the decline in the dollar’s purchasing power since the move into a pure fiat money system.

It’s clear that cryptocurrencies partially fit the definition of fiat money. They may not be legal tender yet, but they’re also not backed by any sort of physical commodity. And while total supply is artificially constrained, that constraint is just… well, artificial.

You can’t compare that to the physical constraint on gold’s supply.

Some countries are also exploring the idea of introducing government-backed cryptocurrencies, which would take them one step closer toward fiat-currency status.

As Russia, India, and Estonia are considering their own digital money, Dubai has already taken it one step further. In September, the kingdom announced that it has signed a deal to launch its own blockchain-based currency known as emCash.

So ask yourself, how can you effectively hedge against a fiat money system with another type of fiat money?

#2: Gold Has Always Had and Will Always Have an Accessible Liquid Market.

An asset is only valuable if other people are willing to trade it in return for goods, services, or other assets.

Gold is one of the most liquid assets in existence. You can convert it into cash on the spot, and its value is not bound by national borders. Gold is gold—anywhere you travel in the world, you can exchange gold for whatever the local currency is.

The same cannot be said about cryptocurrencies. While they’re being accepted in more and more places, broad, mainstream acceptance is still a long way off.

What makes gold so liquid is the immense size of its market. The larger the market for an asset, the more liquid it is. According to the World Gold Council, the total value of all gold ever mined is about $7.8 trillion.

By comparison, the total size of the cryptocurrency market stands at about $161 billion as of this writing—and that market cap is split among 1,170 different cryptocurrencies.

That’s a long shot from becoming as liquid and widely accepted as gold.

#3: The Majority of Cryptocurrencies Will Be Wiped Out.

Many Wall Street veterans compare the current rise of cryptocurrencies to the Internet in the early 1990s.

Most stocks that had risen in the first wave of the Internet craze were wiped out after the burst of the dot-com bubble in 2000. The crash, in turn, gave rise to more sustainable Internet companies like Google and Amazon, which thrive to this day.

The same will probably happen with cryptocurrencies. Most of them will get wiped out in the first serious correction. Only a few will become the standard, and nobody knows which ones at this point.

And if major countries like the US jump in and create their own digital currency, they will likely make competing “private” currencies illegal. This is no different from how privately issued banknotes are illegal (although they were legal during the Free Banking Era of 1837–1863).

So while it’s likely that cryptocurrencies will still be around years from now, the question is, which ones? There is no need for such guesswork when it comes to gold.

Security is a major drawback facing the cryptocurrency community. It seems that every other month, there is some news of a major hack involving a Bitcoin exchange.

In the past few months, the relatively new cryptocurrency Ether has been a target for hackers. The combined total amount stolen has almost reached $82 million.

Bitcoin, of course, has been the largest target. Based on current prices, just one robbery that took place in 2011 resulted in the hackers taking hold of over $3.7 billion worth of bitcoin—a staggering figure. With security issues surrounding cryptocurrencies still not fully rectified, their capability as an effective hedge is compromised.

When was the last time you heard of a gold depository being robbed? Not to mention the fact that most depositories have full insurance coverage.

Since the beginning of the year, the value of Bitcoin has more than quadrupled—a tremendous spike in value that has sent investors rushing to invest in cryptocurrencies. But could this be nothing more than a market bubble?

One of the world’s most successful hedge fund managers, Ray Dalio of Bridgewater Associates, certainly seems to think so.

In September 2017, he told CNBC, “It’s not an effective storehold of wealth because it has volatility to it, unlike gold. Bitcoin is a highly speculative market. Bitcoin is a bubble.”

The spike in Bitcoin prices seems to only lend credence to this view. With such an extreme degree of volatility, cryptocurrencies’ value as a hedge is questionable. Most people buy them for the sole reason of selling them later at higher prices.

This is pure speculation, not hedging.

#6: Cryptocurrencies Do Not Have Gold’s History as a Store of Value.

Cryptocurrencies have been around for less than a decade, whereas gold has been used as a store of value for thousands of years. Because of this long history, we know for a fact that stocks and bonds have low or negative correlations with gold, particularly during periods of economic recession. This makes gold a powerful hedge.

What little data we have on cryptocurrencies does not show the same. Consider this year alone: while the US stock market continues to run record highs, the same goes for Bitcoin.

It’s true that gold has also gone up, but the correlation has been very low and, during times of recessions, tends to swing to the negative side, as you can see in the graph below. 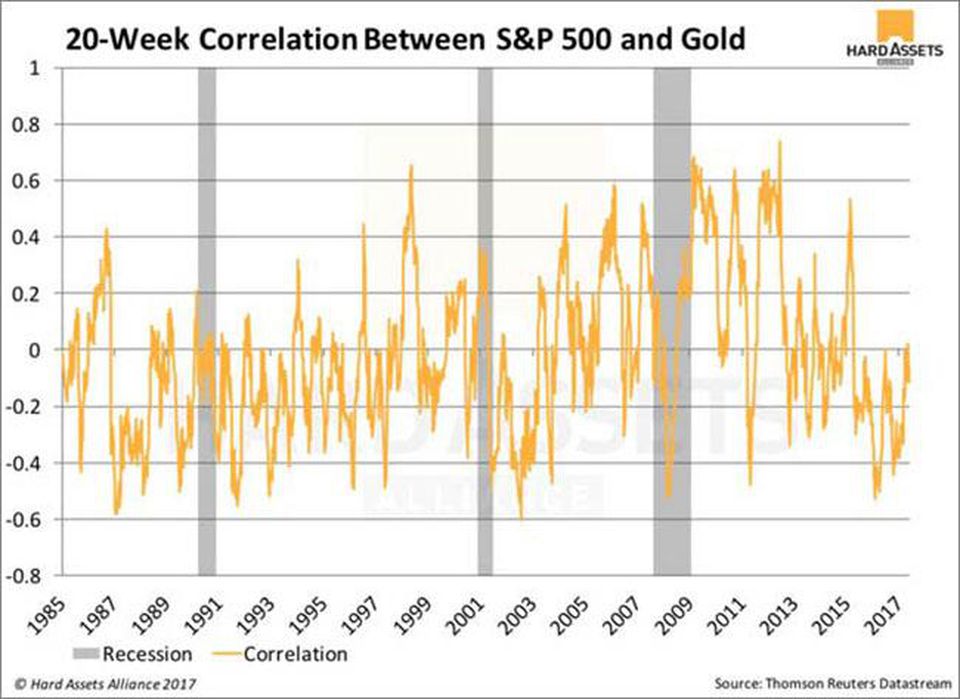 How is that a good hedge?